Circa in downtown Las Vegas on pace for 2020 opening

Circa in downtown Las Vegas on pace for 2020 opening

The co-owner of the Golden Gate and D Las Vegas is a notorious betting man.

Derek Stevens, whose next big project is building the 44-story, 777-room Circa in downtown Las Vegas, is betting that the new resort will open before the end of 2020.

“If they (general contractor McCarthy Builders of Henderson) finish early, they get some rather significant benefits and if it goes the other way, there are some significant penalties,” Stevens said in an informal conversation with journalists on Monday. “We were able to negotiate that because the tax impact of opening in 2020 is significant compared with opening Jan. 2, 2021, so they have an awful lot of reasons to open in calendar 2020.”

Stevens said in a project status report that Circa is “on pace and on schedule for a December 2020 opening.” He said two weeks after its “big pour” of an estimated 2,100 cubic yards of concrete, workers on Saturday completed the secondary “little pour” to develop the new property’s foundation.

“That gives us all of our foundation work now on the elevator shafts all completed,” he said. “We have about 276 caissons completed at this point.”

Caissons are underground retaining structures that are part of foundation work. 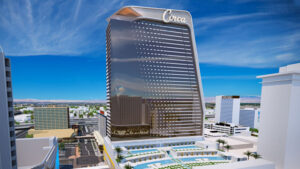 “I think starting in about 10 days you’ll see a couple of cranes show up (on the site) and when people see the cranes, it’s kind of the next defining moment,” he said.

The resort project, introduced in January, is being built on a city block that once housed the Las Vegas Club, Mermaids and Girls of Glitter Gulch topless club, across Main Street from the Plaza.

The 1.25-million-square-foot property will have a separate nine-story, 1,201-space parking garage, dubbed the “Garage Mahal,” on the west side of Main Street to be connected by bridge to Circa. 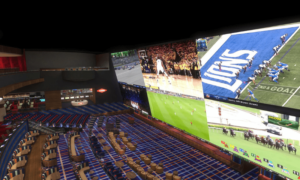 Stevens has also promised to deliver the biggest sportsbook in Las Vegas “with the biggest screen in sportsbook history” and plans to be able to show every major game being broadcast at the planned three-story sportsbook venue.

Circa in downtown Las Vegas on pace for 2020 opening — VIDEO